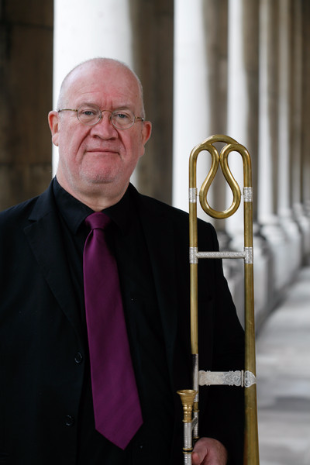 Stephen won an Exhibition to Trinity College of Music and afterwards studied at The Guildhall School of Music and Drama 1969 to 1972 under Denis Wick. Whilst at The Guildhall he developed his ability to double on all low brass instruments: euphonium, tuba and bass trombone. An interest in early music led him to take up the bass sackbut as well as becoming one of the first to join the "authentic" movement on a variety of what were then obsolete instruments. Stephen is a founder member of such ensembles as The London Classical Players, Orchestra of the Age of Enlightenment and the Academy of Ancient Music.

He and his fellow trombone players revived a menagerie of narrow and large bore trombones, serpents, ophicleides, valve trombones and buccines in what has turned out to be the heyday of recording when every piece of classical music was re-recorded in a digital format for the new Compact Disc.

Stephen was for many years a session musician being first call for all of London's contractors and playing every type of music in TV and recording studios. Many famous recording artists have Stephen on their recordings from Michael Nyman to Julie Andrews, Pink Floyd to Paul McCartney, Benny Hill and Rowan Atkinson, Elton John and The Carpenters. He worked with perhaps what are now considered the benchmark film composers: Bernard Herrmann, Elmer Bernstein and Jerry Goldsmith. He played with The Philip Jones Brass Ensemble and London Symphony Brass Ensemble. As well as appearing as Principal Bass Trombone with all the major symphony orchestras and Opera houses in Great Britain he has also managed to fit in 18 years with The National Philharmonic Orchestra which was London's premier recording orchestra, specialising in film and commercial music as well as recording huge operas each year with Pavaroti, Domingo, Joan Sutherland et al.

Still with a very varied musical diet he is currently a member of the Amsterdam-based Orchestra of the 18th Century, Orchestre Révolutionnaire et Romantique and London Baroque Soloists. In 1992 took the position of principal Bass Trombone with The BBC Symphony Orchestra﻿.