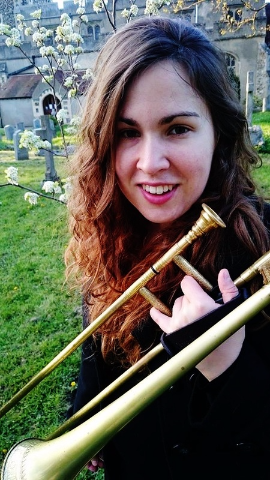 Born and raised in South Wales, Stephanie read Music at King’s College, Cambridge and discovered her passion for historical performance at the Dartington International Summer School in 2012. A year later she became the first ever principal study sackbut player at the Royal Academy of Music in London, studying with newly appointed professor Adam Woolf. Stephanie was appointed Regent Fellow (2015–16) of the Academy and was awarded MMus (Historical Performance & Research) with Distinction in 2015. During 2016–17 Stephanie is undertaking further study at the Schola Cantorum Basiliensis in Switzerland under the tutelage of Bruce Dickey and Charles Toet. Having worked frequently with HMSC since her first term at the Academy, she was delighted to accept the invitation to become a permanent member of the group in July 2016.

Stephanie enjoys a career encompassing classical and contemporary music alongside her work as a historical trombone specialist. As a period instrumentalist she has performed with such distinguished ensembles as The City Musick, Gabrieli Consort & Players, Classical Opera and the London Handel Orchestra. A highly versatile musician, recent engagements have ranged from a UK tour of The Fall of the House of Usher by contemporary composer Charlie Barber, to twenty recitals for ‘Bach to Baby’ – the acclaimed classical concert series for babies and toddlers – and concerts with internationally renowned trombone quartet Bones Apart.