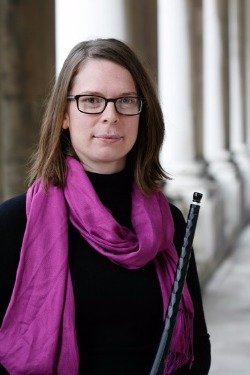 Helen first encountered the cornett during postgraduate research in musicology at Birmingham University. After initial studies with Jamie Savan, Helen went on to study with Bruce Dickey at the Schola Cantorum, Basiliensis, generously supported by Birmingham University's Centre for Early Music Performance and Research. Helen graduated in 2008 with a final concert programme exploring three centuries of cornetto performance practice, from the 15th-Century Italian frottole repertoire to the large-scale sonatas of Johann Heinrich Schmelzer. Since completing her studies, Helen has continued to pursue research and editing interests, focusing on the little-known repertoire and performance practice of the cornettino, and published the first complete performance edition of the instrumental sonatas of Matthias Weckmann in 2013.

Helen has performed with leading period instrument ensembles throughout the UK and Europe, including the Choir and Orchestra of The Sixteen, English Baroque Soloists, The English Concert, La Chapelle Rhenane, Copenhagen Soloists and I Fagiolini and was thrilled to be invited to join HMSC in 2012. Helen lives and teaches in Somerset.